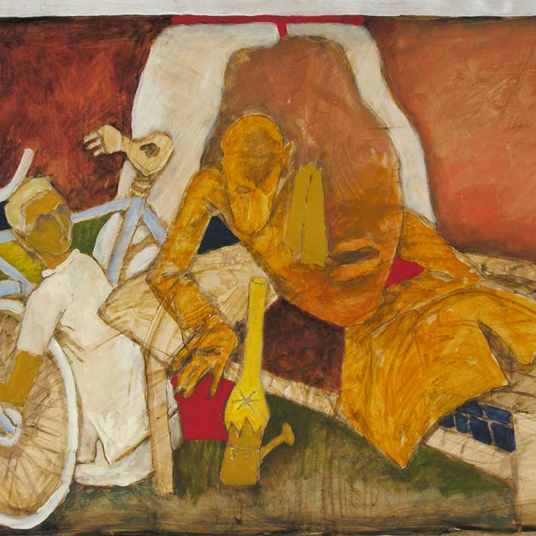 Maqbool Fida Husain (1913-2011) was a legendary figure in the history of Indian modernism. A founding member of the Progressive Artists Group, formed in Bombay in 1947, Husain played a leading role in revolutionising art in India by parting ways with the dominant genres of academic painting and miniaturist nostalgia.

When he died in London at the age of 98, his life had already traced an arc through one of the most cataclysmic yet vibrant centuries in human history. Husain lived through two World Wars, the Partition of the British Raj into the modern nation-states of India and Pakistan, the Cold War, Algeria and Vietnam, and conflicts in South and West Asia. His chosen media ranged from oil painting and watercolour, through lithography and serigraphy, to sculpture, architecture and installation. He was also a film-maker, poet and memoirist who wrote in Urdu, Hindi and English.

Husain called himself a global nomad developing strong connections with the UK, the USA, Czechoslovakia, the Arab world in general, and Qatar in particular, which offered him refuge when adverse political circumstances forced him into exile from his beloved India. Three themes lie at the core of Husain’s art, and are reflected in this exhibition. First, the idea of home as a habitat remembered from childhood, shaped in the present, or discovered through exploration. Second, the human passion for creativity expressed in every society, period and discipline. Third, a pluralist approach to the divine and cosmic aspects of being, articulated through the myths, symbols and narratives of the world’s religions and philosophies. M. F. Husain: Horses of the Sun bears witness to this magisterial artist’s work across more than six decades; the title refers to a recurrent motif in his art, a personal symbol of self-renewal and vitality. 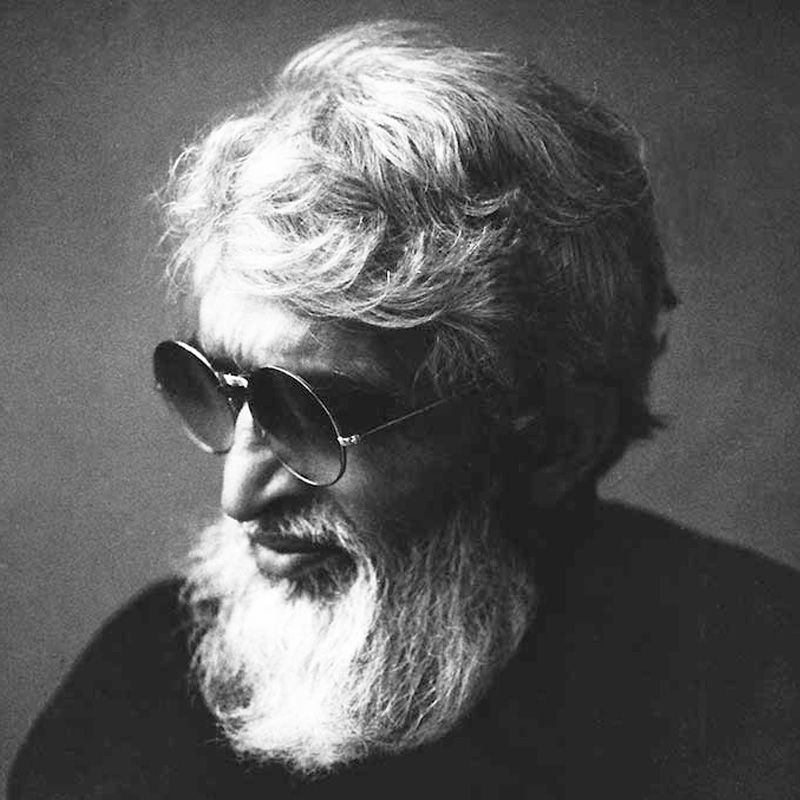 M.F. Husain was born in 1915 in Pandharpur, Maharashtra. In 1935, he moved to Mumbai to join the Sir J. J. School of Arts. In need of some funds, he started designing and painting graphic billboard advertisements for Bollywood movies. He also designed and created furniture and toys. In 1947, after his first work was exhibited by the Bombay Art Society, he was invited by F.N.Souza to join the Progressive Artists Group. Husain, who became known as the “Picasso of India,” created works that could be caustic and funny as well as serious and sombre. When he took up painting as an art form, he returned time and again to his roots and to themes that blended folk, tribal and mythological art to create vibrantly contemporary, living art forms. These themes usually treated in series included icons of Indian culture such as Mahatma Gandhi, Mother Teresa, characters from the Ramayana, the Mahabharata, the British Raj, and motifs of Indian urban and rural life. The early evolution of his painterly language was overtaken by adventurous forays into installations and performance art. He was known for executing bold, vibrantly coloured narrative paintings in a modified Cubist style.

Husain, a secular Muslim, triggered criticism for his often irreverent treatment of sensitive subject matter, including Hindu goddesses painted as nudes. After fighting a series of lawsuits and receiving death threats from Hindu extremists, Husain lived from 2006 in self-imposed exile, mainly in London and in Dubai. When the Museum of Islamic Art opened in 2008 in Doha, Qatar, its collection included the first of 99 specially commissioned paintings by Husain. In 2010, he accepted Qatar’s offer of citizenship.

Husain also received recognition as a printmaker, photographer, and filmmaker. In 1967, Husain won the Golden Bear at the International Film Festival at Berlin for his documentary ‘Through the Eyes of a Painter’ and made several short films including ‘Gajagamini’ and ‘Meenaxi – A Tale of 3 Cities’ which was screened at Cannes Film Festival in 2004.

Husain was awarded the Padma Shri in 1966, Padma Bhushan in 1973 and the Padma Vibhushan in 1991. He was also nominated to the Rajya Sabha in 1986 amongst many other awards and honours.

Husain was one of the most celebrated and internationally recognized Indian artists of the 20th century and passed away in 2011 in London. 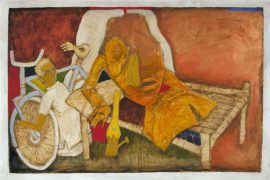 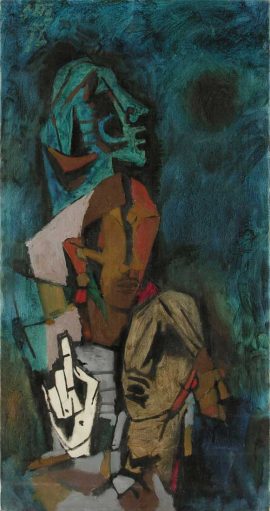