Shyamal Dutta Ray was born in Ranchi, Bihar in 1934. He completed his diploma from the Government College of Arts and Crafts, Kolkata in 1955. In 1954-56, he taught at Jagabandhu Instituition, Kolkata.In 1999, he became a member of the Society of Contemporary Artists, an artists’ collective, that sought to introduce innovativeness into the art world of the 1960s.

His early works were done in oil paint, but unfortunately he became allergic to it and had to start using watercolour instead. He was regarded as a master watercolourist with great skill in the technique of watercolour. Although traditionally, the Bengal school of Art used watercolours in light tones and diluted colours, Ray was able to produce depth and intensity using the same medium. Thus Ray was instrumental in reinventing watercolours as a medium and this was a turning point in the history of the Bengal School of Art. His works reflect the city life of Calcutta, with its happiness and sorrow, struggle and strife, poverty and hope. The melancholic and pensive works reflect the contradictions of life around him. Broken walls, crumbling plaster, cobweb-filled rooms, empty houses where gardens have become wilderness record a transient world. They are surreal, ironic, unsparing and bring out awareness of a disintegrating society. The imagery in his works stems from his illness during his childhood, the experience of the Bengal famine and from his personal experiences.

Ray received many honours like the Award of Merit from the Lalit Kala Akademi, the Shiromani Kala Puraskar, and the Special Commendation of the Karnataka Chitrakala Parishad. His works have been exhibited widely in India and abroad. He passed away in 2005, but his work continues to be shown posthumously. 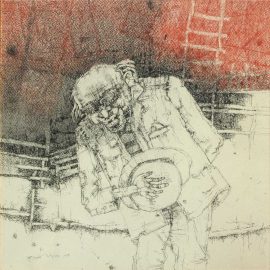