Nirode Majumdar was born in 1916 in Calcutta. He had his first education under Kshitindranath Majumdar, student of Abanindranath Tagore, at the Indian Society of Oriental Art in Calcutta, where he came into close contact with Abanindranath. After he finished his course Mazumdar was awarded the Norman Blount Memorial Award for his artistic skill.

He was from the first generation of Indian modernists such as Subho Thakur, Pradosh Das Gupta, Rathin Maitra, Prakrishna Pal and Paritosh Sen; and founded the Calcutta Group in 1943. He is known for his sensitive economy of pictorial means and his rootedness in the pictorial tradition of Bengal, which he harmonized with the European modernist composition. His first solo show in Calcutta was organised by the Calcutta Group in 1944.

Mazumdar was awarded with a French government scholarship, on which he studied engraving in Paris at the academy of the French artist Andre Holland. In 1951, he participated in a group show held at the India House in London, and worked for sometime as the curator of the art gallery there. In 1955, Nirode returned to Paris where he had a solo show at the Gallerie Barbizon in Paris in 1957. While living in Europe for ten years, he befriended many writers and artists such as Constantin Brâncuși, Georges Braque, and Jean Genet.

Mazumdar returned to Calcutta in 1967. He painted large canvasses, gradually moving towards Tantric themes in his work, especially the image of Devi One particularly characteristic of his work was that he pictorially developed a single concept in a series of canvases. His work remained rooted in the pictorial tradition of Bengal, which he harmonized with European modernism. 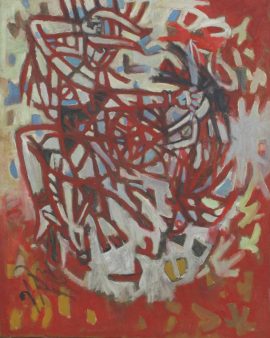