K.S.Kulkarni was born in 1916 in Karnataka. He experienced many hardships during his childhood. His father died when he was eleven, so he was forced to paint signboards. After a diploma in Fine Arts specialising in murals in 1940 and then a post graduation course from Sir J.J. School of Art, Mumbai; he went to Delhi in 1943 to study textile design.

In 1945, Kulkarni quit his job and joined the art department of the Delhi Polytechnic and became a member of Delhi’s All India Fine Arts and Crafts Society and two years later, he founded two creative spaces: Delhi Shilpi Chakra and Triveni Kala Sangam. In 1972, he served as chairman at the Lalit Kala Akademi, Lucknow until 1978 and vice chairman at the Lalit Kala Akademi, New Delhi from 1973 – 1978.

Kulkarni’s art gradually evolved, and was inspired by decorative grace of the classical Indian figures in the Ajanta murals and Chola bronzes; and the vitality of modernism, so he combined the two styles in his figurative works. His works are focused on the Indian figure encapsulated with movement. He played with sensuosness of colour and form to heighten the plastic potentiality of form. One of his most famous series were a series of 200 vibrantly sensuous pen and ink drawings based on Khajuraho in 1947. His extensive travels to South America especially pushed his visual vocabulary with Mayan and Etruscan art, and the simplicity of children’s art. He would paint a cityscape like a stack of blocks using bold outlines and strokes. The mundane was turned into the focus of his works.

Kulkarni was a recipient of several national awards and his works were exhibited in India and abroad. He passed away in 1994. 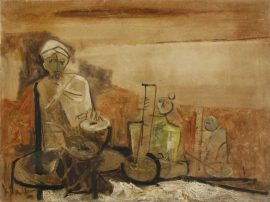