While studying art in South Korea, she realized that her affinity was neither with traditional Chinese painting and calligraphy, nor with the modern western art practices. She therefore imbibed the techniques of both traditional and contemporary art-making. She also meditated on the principle of formal repetition, which is used in traditional crafts like weaving. In her own work, she uses this principle to create an experience of rhythm, while also transforming its formal function to provide variations in tone.

Nature and landscape plays a pivotal role in Jin Sook’s work where the elements of nature act and react on the viewer’s mind like brief Zen notations. The Taoist images of simplification of forms in space are reflected in the formal economy of her work. She employs the deceptively simple line as her tool of expression. By cutting the painted sheet into strips, she shares the dilemma of the contemporary artist who cannot view the landscape as a harmonious whole. Even as she replicates the unreliable temperament of nature in her work, she feels the need to reformulate the landscape in terms of a new order. She uses spontaneous brush work, natural pigments and linear strips which are then positioned in such a way as to give the viewer the experience of the changing depth, space and surface texture when the viewer moves from one viewing point to another.

Jin Sook’s works are not simply abstract variations on a landscape. Her later work proves that she has begun to experiment with sculptures composed from paper, light, colour, and shadow. She has moved beyond the boundaries of conventional abstraction, extending its plastic and expressive possibilities.

Jin Sook won many awards including the Bombay Art Society Award, Mumbai in 1984 and the D. G. Nadkarni Art Critic Award in 1986. In 2000, she was selected to participate in the 10th Triennale in India. She lives and works with her artist husband Vilas in Mumbai. 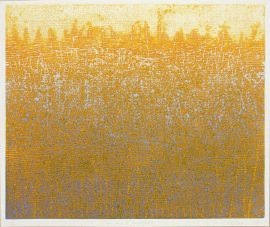