Debashis Kabasi was born in Kolkata in 1965. Although he is deaf and dumb, he vibrates with optimism. He completed his Bachelor of Fine Arts from Government College of Art and Crafts and his Master of Fine Arts from Visva Bharati University, Santiniketan.

Debashis explores human figures in vigorous search for a definite way of life; and his generation of people who have split personalities due to their struggle of keeping up with the changing times. Debashis’ paintings raise your curiosity for their aura of gestures, hand and face movement. Action-packed, most of his human characters’ two eyes look in two different directions which shows their split personalities. They try to look into two different worlds at the same time. For him, hand gestures play a significant role to converse, he paints several hand movements that tend to do their own talking.

After he skillfully completes his coloured works, he retraces some of the outlines of those figures, in dark shivering lines, just next to the figures. It is like a child distorting an adult’s creation. This duality is a permanent characteristic of his work. He first doodles with paint and then defines the definite shape and outline of these images, the contrasting duality becomes more sane. The initial doodle which is changed into a recognisable shape by the end often remains within itself – an abstract layer of painting seems to superimpose a figurative scene.

He has had several solo and groups exhibitions in India and abroad. He lives and works in Kolkata. 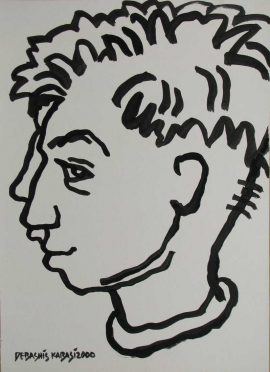