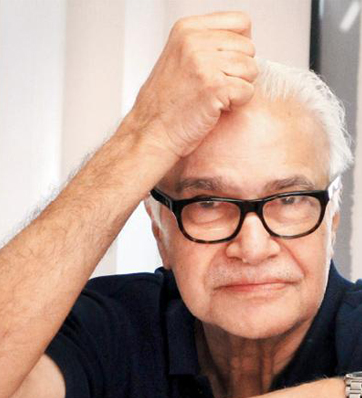 Mehlli Gobhai deserved to be known better by the common man. One of India's greatest abstractionists, Gobhai's canvases showed little but spoke a lot. Shireen Gandhy, whose Gallery Chemould presented his works in five solo exhibitions and two group exhibitions, says, "It would take him a long time to create a body of work.

His abstraction was so laboured. In a year or a year-and-a-half, he would make eight solid works. We started showing him in the '90s, and subsequently, we had about six or seven exhibitions. Each one progressively different, and yet, the ethos was very restrained, dark, brooding. One exhibition was canvases, another was split paper. The surfaces he worked on also spoke back to him."

Began as an art director
Gobhai began his career as an art director and illustrator at J Walter Thompson, and in 1957, two of his entries for Air India were included in the prestigious Communication Arts Guild. He subsequently studied at the Royal College of Art, London, and then the Pratt Graphic Centre in New York, where he chose to live for nearly two decades. That is part of the reason why only the art fraternity in India knew about him, until he moved back to his city in the 1980s. Gandhy says, "One of the things I got to understand about him was that artists really appreciated him. When an artist appreciates you, you are what you call an artist's artist. Good artists appreciated him. That, of course, led me to his studio. Soon after, we began to discuss [his exhibitions]."

A bachelor, Gobhai's Cuffe Parade house, along with his chikoo farm in Gholvad, soon became a salon of sorts. He reconnected with old friends: artists Jehangir Sabavala and Meera Devidayal, architect Charles Correa, and adman Sylvester DaCunha, and made some new ones: Gandhy, author Jerry Pinto and art critic Ranjit Hoskote.

His studio in Mumbai would be scattered with family photographs, his drawings, books and papers, his paints, his brushes and two dolphin head skeletons. Even though his house was filled with beautiful objects, "he wouldn't display them in an ostentatious way. It was just that he was surrounded by the things he loved," recalls Kamini Sawhney, curator at the Jehangir Nicholson Art Foundation (JNAF), who knew him from an advisory council at JNAF.

Not a pushy person
It can be said that his personality didn't match his work. "As a person, he was extremely charming, very good-looking, always loquacious, and wonderful company," says Gandhy. "He was a very, very affable human being; easy to get along with and gentle. But there was certainly a dark side with which he would approach the canvas as an artist. There were very weird, abstract, dark, burnt umbres, dark browns, very melancholic."

Sawhney, on the JNAF website, describes his paintings as ones that "feel and look like either an aged scrap of leather, an old parchment, a metal sheet or the rind of a fruit." When we ask Sawhney why he wasn't better known, especially to Mumbai audiences, she says, "Mehlli was not a pushy kind of person. He didn't play his cards the way anyone else [with his talent] would have. His work was very spare and minimalistic, and that was the way he was when talking about his work as well. He just wasn't very good at selling his work. Ranjit [Hoskote] used to say that he's one of the finest, if not the finest, abstractionists this country has. A lot of people are not necessarily recognised during their lifetime. They let their work speak for themselves."

In March next year, Gandhy, along with curators Nancy Adajania and Hoskote, will present a retrospective of his works at the NGMA, Mumbai. It would be a good time to go and listen to what Gobhai had to say.

This article was published on 15 September in Mid-day.