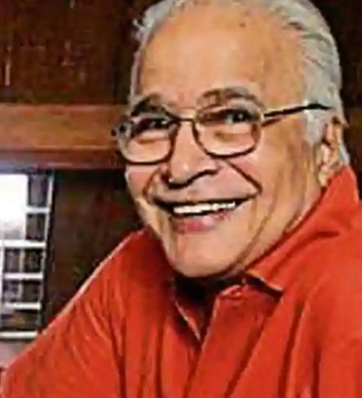 It is so hard to say good bye to Mehlli Gobhai—one of the finest abstractionists this country has seen and one of the most gracious human beings I have known.

Mehlli, who passed away in Mumbai on Thursday at 87, was part of the advisory council at the Jehangir Nicholson Art Foundation at the Chhatrapati Shivaji Maharaj Vastu Sanghrahalaya in Mumbai, and so much a part of my early years at the Foundation. Along with Ranjit Hoskote, he co-curated one of my first projects at the gallery, Nothing is Absolute: A Journey through Abstraction, which was presented in 2013. Putting this show together involved many evenings at Mehlli’s home, sipping endless cups of coffee and pouring over books in his library that opened a whole new world to us—from Juan Eduardo Cirlot’s A Dictionary of Symbols to Nigel Pennick’s The Ancient Science of Geomancy. While structure and form played a pivotal role in his art practise, it was in the making of this show that I saw how catholic his influences were. They ranged from the theories of other practitioners like Wassily Kandinsky and Paul Klee to the geometries of Hindu, Buddhist and Islamic architecture, and even sought inspiration from quotidian objects.

His own abstractionist works were pared down—the largest in the Foundation’s collection(an untitled work done in the year 2000)  resembles the surface of a parchment dipped in his signature tones of brown verging on black. Sharp lines cut across the painting, reducing the human body, stripping it of curves, and paring it down to the bare essentials. This style largely defined his later practice.

Like many artists Mehlli began as a graphic artist and he never let us forget it. No catalogue escaped his notice and no mistake either. Every little detail was important; design, line and symmetry were sacred. He created some of the most delightful children’s books, such as the wonderfully illustrated Laxmi the Bull who wouldn’t and The Legend of the Orange Princess, and remained extremely proud of them. As a young artist in the 1950s, Mehlli illustrated the covers of India’s first jazz magazine Blue Rhythm, which was produced out of Bombay by two students of St Xavier’s College, Jehangir Dalal and Niranjan Jhaveri. Journalist Naresh Fernandes’ blog, Taj Mahal Foxtrot, offers a vivid description of Mehlli’s cover art.

After spending nearly 20 years in New York, first as a student and then as an artist, Mehlli returned to India in the 1980s. “Most of the artists I admired were leaving the city and working elsewhere and my trips to India became increasingly important to me. I was tired and bored by the artificial stimulus of the New York art scene. I had ‘enough already’ as we New Yorkers used to say, and as someone moving towards abstraction in my own work, I was re-discovering the fertile ground that was here in India,” he wrote in his essay to the catalogue of the 2013 exhibition.

Mehlli was an artist in every sense: he created great art and he loved great art. His home is filled with pieces of art and sculpture that moved him.  Some were antiques others were craft or artisanal objects that reminded him of the hidden order in nature. He was also a connoisseur of good food and wine and we spent many an hour debating the merits of one cake shop over another or exchanging notes over recipes. His dog Ari was one of the great loves of his life and his passing a few years ago left Mehlli disconsolate.

A series of small strokes left Mehlli incapacitated in his final years and it was heartbreaking to see him struggle to come to terms with the limitations it placed on him as an artist. The last time I met him was only a few months ago. We sat at his home and shared his favourite blueberry cheesecake from Theobroma. There was an unfinished work up on the wall that seemed like it was never going to be completed and it took me back to the evening before the opening of Nothing is Absolute, as we sat around the table at his home. “It’s terrible!” he told me. “All these wonderful evenings are going to end... evenings of fellowship, of conversation, of working together.”

Why no Mehlli,” I said, “I will come and visit you often.” A promise I wish I had fulfilled more often.

Kamini Sawhney is the curator of the Jehangir Nicholson Art Foundation.

This article was published on 14 September in the Hindustan Times.