Satish Chandra was born in 1940 in Ghaziabad, Uttar Pradesh. He joined the College of Arts and Crafts, Lucknow where he graduated in Fine arts in 1963 and further completed his post graduation in Landscape and Watercolour Painting in 1964.

Chandra’s childhood was spent in Khurja, where his family lived in their ancestral haveli. It was surrounded by lush green fields, lakes and rivulets, rich fruit orchards, mango groves and rolling meadows. Hence, his childhood left a deep mark on him. His love for nature inspired all the landscapes he painted during his lifetime while becoming one of the most renowned landscape artists in Uttar Pradesh. He had the capacity of making one feel the endless space that the great Gangetic plain gives one, lying low over open skies, on the one hand, and the intimacy of the thorn brush forests on the other.

His paintings give one the feeling of sharing vast spaces with others while at the same time reserving a space for oneself in them.

He was influenced by his travels and the people he met. Their houses made of wood and stone, temples with different size bells, and the boundless beauty of Nature all found their way into his sketchbooks. His palette included all the colours in the spectrum, as he coaxed atmospheric nuances on to the canvas.

Chandra won several awards to his credit including the National Award by Government of India, New Delhi in 1989 and the Yash Bharti Samman, Government of Uttar Pradesh in 1994. He was also awarded the UP State Lalit Kala Akademi Annual Award in 1964, 1966, 1967, 1968, 1977 amongst many other awards.

Chandra passed away in Uttar Pradesh. 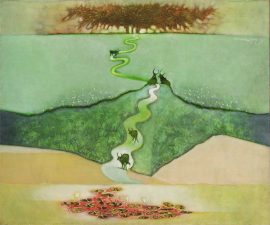