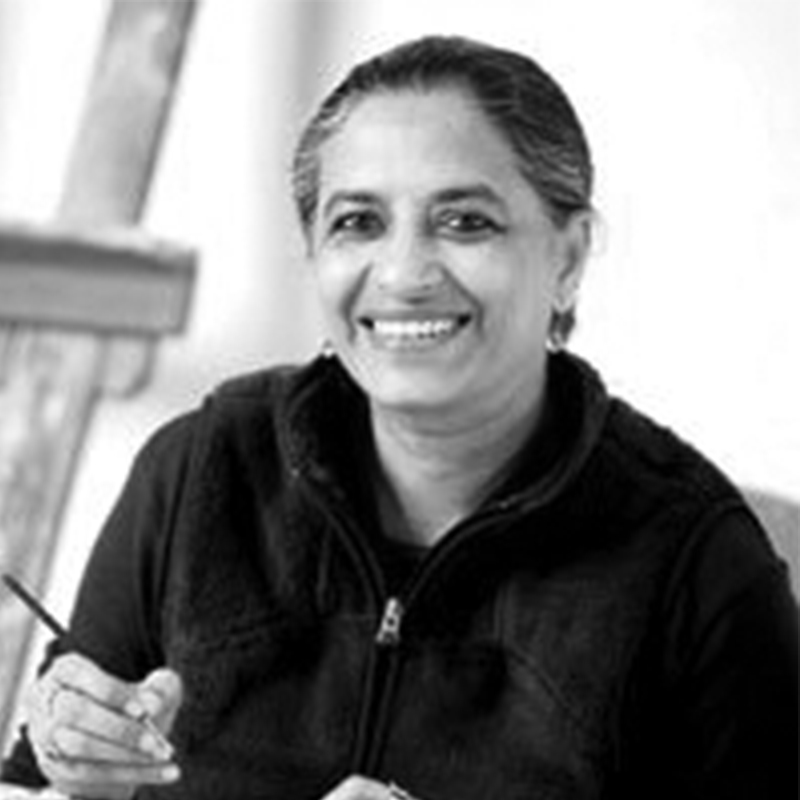 Manisha Parekh was born in Gujarat in 1964 and raised in New Delhi. She holds an Masters in Painting from both the Royal College of Art in London (1991-93) and the M.S. University in Baroda (1983-1990). She was one of the founding members of Khoj International Artists Workshop.

Having well known painters, Manu and Madhavi Parekh – for parents, Manisha grew up with paints and brush around her. Parekh is one of the few artists working in India today who continues to explore an exclusively abstract language. Nasreen Mohammedi who was one of her teachers in Baroda, was a great inspiration to her. Nasreen’s geometric draftsmanship as well as Gaitonde’s ethereal abstractions and Jeram Patel’s gestural ink drawings shaped her works. Her artistic practice also pays reference to the craft and textiles traditions of her native land. Her works incorporate painting, collage and drawing that bring out the geometric and the organic. Her most recognized works are created by layering shapes cut from handmade papers into dense fields of pattern and energy, sometimes perforating the surface and adding other materials.

Parekh has emerged as one of the significant young Indian artists, whether it’s for her skillfully executed graphics of articles of daily use, or her more ambitious works in the area of conceptual, site-specific installations. Her style has always been like a clear, scientific structure. Using minimal color, she uses harmonious forms that are linked and unfold a larger vision. She has always shown a marked preference for black and white, which allows her to concentrate on form over color. Exploring the densities, opacity and transparency of inks, she is fascinated by the life they take on when in contact with paper, seeming as do to almost animate it.
Sometimes an oval and a line meet and become something new. She has a continuing fascination with vessels, and breathes life into inanimate objects, which themselves take on connotations of the human body. Her earlier rugged brushwork gradually evolved into loose strokes, and the handling of figures is done in a more calm manner, reducing pictorial tension.

Parekh has exhibited extensively in India, London and Germany. She also did a stint of teaching at Baroda and then joined the Kanoria Centre for Arts in Ahmedabad.

In 1990, she was awarded a fellowship by the Kanoria centre and also won the Inlaks Foundation Scholarship for a postgraduate course at the Royal College of Arts, London.
Parekh lives and works in New Delhi.