Harish Raut was born in 1925. He graduated with a diploma in painting from Sir J.J School of Fine Art in Mumbai in 1952. During his early years, he worked as a clerk, but continued to paint during his free time. He soon developed a distinctive figurative style and his main subject for his works were rural women, going about their daily chores. His early work was based on the rural realities of his hometown Bordi and the neighbouring town of Bassein(Vasai), Maharashtra. Rural India continued to inspire him and he found his muse once again in the women of Rajasthan, Madhya Pradesh and Kerala.

In less than a decade his work was winning awards all over India. Over the course of his long career he had 53 solo man shows in Mumbai, Kolkata, Delhi, Washington D.C., New York, and Ottawa. He passed away in 2002. 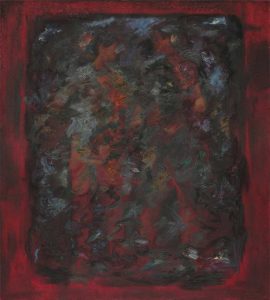